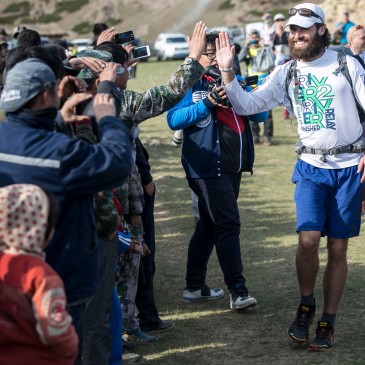 Adam Kimble is a professional ultrarunner ((named Tahoe’s “Best Community Athlete” of 2019 by the Sierra Sun), race director motivational speaker and running coach from Tahoe City, CA.  He is married to his high-school sweetheart, Karen, and they have a six-year-old chocolate lab named Sofi.  Adam played Division-1 baseball at Bradley University prior to developing his passion for ultrarunning, and after graduation in the summer of 2009, he ran his first ever 5k race near his hometown of Minooka, IL.  The race resulted in very bad cramps and a lot of pain, but fortunately it also came with a second-place age group finish!  Once the pain subsided, Adam decided his racing days weren’t done, and he trained to complete his first half marathon in 2011.  After completing his first ultramarathon (50k) in 2014, the question became “what else is my body capable of?”  Following seven podium finishes in 100-mile races, a 60-day transcontinental crossing of the USA (2,500 miles), 60 days alone in the wilderness to become winner of Discovery Channel’s The Wheel, a 31-day self-supported FKT of Great Britain and the three peaks, and the second-fastest time ever on the 172-mile Tahoe Rim Trail, the limits are nowhere close to being reached.

After responding to a casting email in the summer of 2016, Adam was named one of 30 finalists for Discovery Channel’s new survival show, The Wheel.  Only six contestants were chosen out of the 30 finalists, and Adam made the cut!  In September of 2016, the six contestants were flown to remote areas of South America in an attempt to survive in six different eco-systems over the course of 60 days. In November of 2016, Adam completed all 60 days and officially conquered The Wheel, which you can learn about here.

Driving down the coast of the Pan-American Highway in Chile during a 2015 RTW travel adventure with his wife, Adam decided that he wanted to run across the USA in hopes of setting a new Guinness World Record. In April of 2016, he completed his transcontinental run, which you can learn about here.

In July of 2017, Adam and his friend Kris King set off on foot to run the length of Great Britain from John o’ Groats in Northern Scotland to Lands End in southern England.  The two became the first people to complete a self-supported run the length of Scotland, Wales and England, while summiting the highest peak (Ben Nevis, Scafell Pike and Mount Snowdon) in each country along the way.  Adam was fundraising in memory of his late friend, Mark Smith.

In October of 2019, Adam set out to claim the FKT (Fastest Known Time) for the 172-mile Tahoe Rim Trail.  He didn’t break the record, but instead, claimed the second-fastest known time ever on the trail, finishing in 45 hours, 36 minutes!

“Yesterday, I had a gnarly hill at Mile 6, but I was good to go since I’ve been training at Kimble’s school of hill running!”

“I participated in the 2019 edition of the Jungle Ultra, a 230km multi-stage, self-supported race in the Amazon Rainforest, and came in undertrained due to a recent injury and only one prior ultra (or marathon!) under my belt.  Adam provided myself and other runners not only the perfect blend of easy-to-remember and pragmatic coaching and … END_OF_DOCUMENT_TOKEN_TO_BE_REPLACED

“Adam is the best! Having a coach of his caliber genuinely invested in my success is humbling, motivating, and helps to hold me accountable. Having him in my corner has been a game-changer.”

“Adam’s enthusiastic personality is contagious and you can tell that he is passionate about running and having fun while training.   Because of Adam, I have become a stronger, faster, more confident runner.  Even though he makes me sprint and ‘run’ up stupidly steep hills, the only thing I want to say is, Thank You and I … END_OF_DOCUMENT_TOKEN_TO_BE_REPLACED

“Thanks so much for being a part of the Opening Ceremony today…You really nailed all the topics is a very short time which is exactly what we needed.”